This page shows images alleged to be of Clausewitz's great 19th-century competitor, the Swiss/French historian and theorist Antoine-Henri Jomini (1779-1869). See Wikipedia articles on him in English, French, German, and Russian. We are dubious about some of the images, which in some cases do not look like the same man—some are probably of his son Alexander. See also Christopher Bassford, Jomini and Clausewitz: Their Interaction (Paper presented to the 23rd Meeting of the Consortium on Revolutionary Europe at Georgia State University, 26 February 1993; slightly edited in June 2000). Also see bibliographical data on Jomini.

We believe that this drawing, a study for a painting of Jomini in late middle-age, is in the collection of the town museum of Payerne, Switzerland (Jomini's home town), which maintains a permanent exposition on him.. See more variations on this study below.

The images below are definitely of Antoine-Henri Jomini 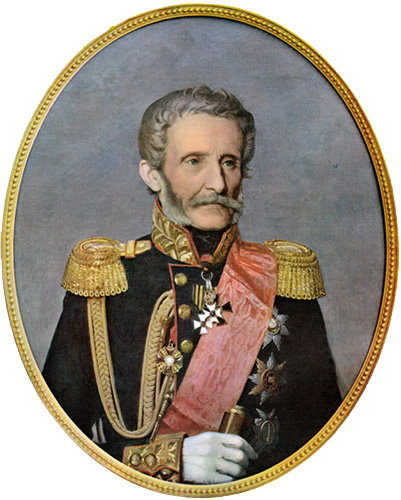 1859 portrait by Charles Gleyre. Click picture for a much larger image.

The pictures below are dubiously labeled as Antoine-Henry Jomini.
Most are probably of his son, the Russian diplomat Alexander Z. Jomini (1814-1888).

We don't see any resemblance here.