Clausewitz (1780-1831) was originally buried in the the military cemetery in Breslau (modern Polish Wroclaw); his wife was buried with him after she died in 1836. When the Polish government decided in 1971 to change the land to residential use, the East German regime appropriated the joint tomb's markers and contents and spirited them to Clausewitz's hometown, Burg. [There is a good discussion in Vanya Eftimova Bellinger, Marie von Clausewitz: The Woman Behind the Making of On War (Oxford University Press, 2015), p.240.] 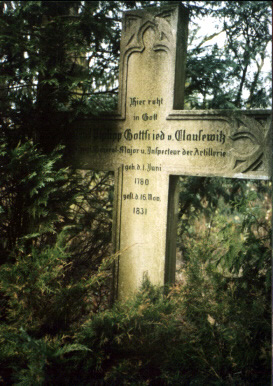 During a trip to Germany, former USMC officer Joseph M. Guerra of Portugal had the good fortune to visit the Clausewitz gravesite at the city cemetery in Burg, Germany. For the benefit of those who may be contemplating a trip to Germany and may wish to visit the Clausewitz tomb, he provides the following directions, which we have supplemented with info from a more recent trip report by KCL War Studies BA students Thomas Guest and Alex Furse, who visited the site in July 2006. 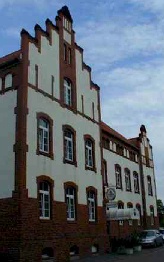 Taking the turnoff from the Berlin-Hannover Autobahn, one follows the signs to Burg. The town itself used to be quite run down, but is filled with older architecture that the Communist government didn't get around to knocking down and replacing with the typical characterless prefab concrete panel monstrosities which scar much of eastern Germany. It seems to have brightened lately. Many of the original pre-World War II German Army barracks—Burg was the home of the 304th Artillery Brigade of the Soviet 3rd Shock Army during the Cold War—appear to be in relatively good shape from the outside. A Bundeswehr installation, known as the Clausewitz Kaserne, is also there. Once inside Burg, follow the signs to the city of Genthin on Highway 1. Just outside the city limits on the left hand side of the road is Friedhof Burg. (Note that some maps show a military cemetery in the area on a different road, but this is not the correct location of the gravesite.)  Across the road is a large landfill. Thomas and Alex report that "finding the landfill is the key, although it is pretty difficult to miss. Although we walked from the station (taking about an hour) we believe that there are two buses that run to the cemetery from the station, numbers 3 and 45. The cemetery itself is almost invisible from the road, with only a parking lot in view. Once through the main entrance, one should veer right and then take a first left down a gravel road bordered by trees. The Chapel will come into view after a couple of minutes walking. Located directly behind the chapel is Clausewitz's grave, at Google Earth coordinates 52°16’40.57”N, 11°53’40.57”E. Turn right before the chapel—the path to the tomb will beon the left. There has been quite an improvement in the standards of upkeep of the tomb. There is a paved space with two benches and flowerbeds, and a large stone cross with the words,

Note that this name differs from that generally given by scholars for Clausewitz, "Carl Philipp Gottlieb von Clausewitz." At the foot of the cross is a large marble slab that marks the grave of Marie Sophie, his wife.  He is evidently buried beneath her.  The gravesite is well maintained and surrounded on three sides by evergreen trees. 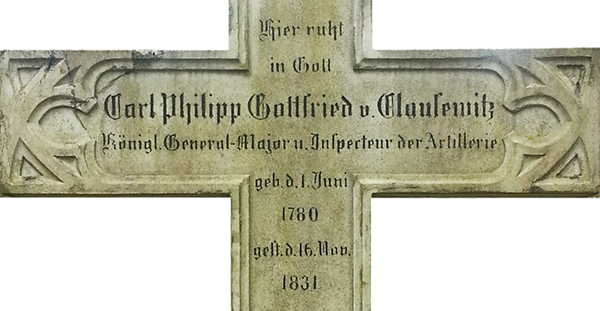 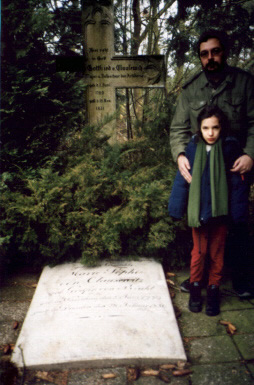 Joe Guerra, his youngest daughter, and the Clausewitzs' gravesite a few years ago. 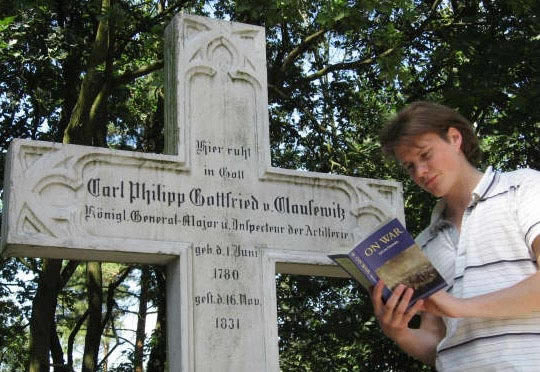 Thomas Guest at the cross. 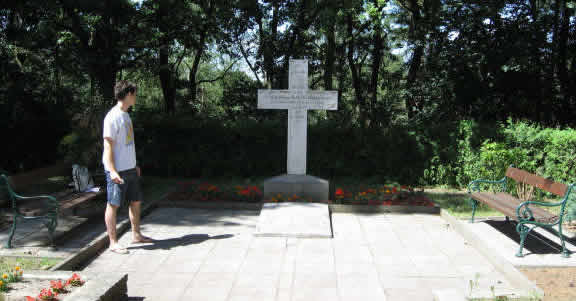 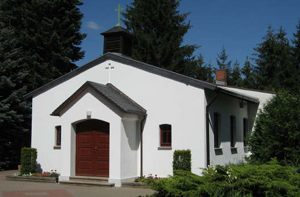 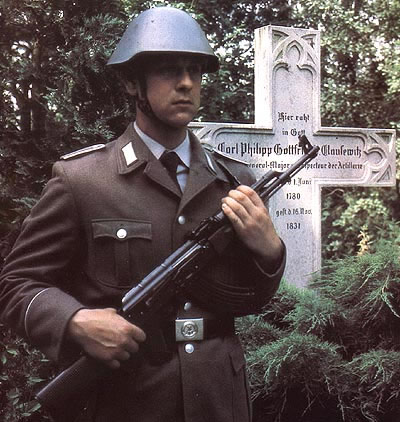 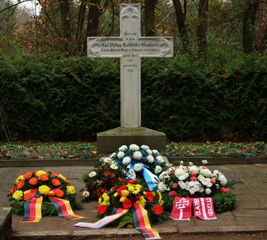 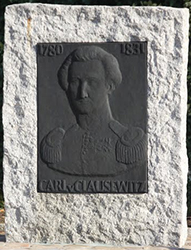 OTHER USEFUL PAGES ON THE CLAUSEWITZ HOMEPAGE

You can search for any book or other item through AMAZON.COM 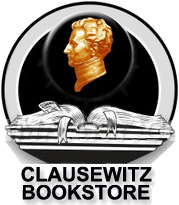