"The aggressor is always peace-loving: he would prefer to take over our country unopposed."

"A short jump is certainly easier than a long one, but no one wanting to get across a wide ditch would begin by jumping half-way." (CLAUSEWITZ)

"The Haiti intervention by U.S. forces acting under a United Nations mandate, for instance, was defended as an exercise in restoring a Haitian democracy that had never existed; but it might be better described in the language of Clausewitz as the continuation of American immigration control by other means."
(THE RT HON THE BARONESS THATCHER. LG.,OM.,FRS., AT WESTMINSTER COLLEGE, FULTON, MISSOURI ON SATURDAY, 9 MARCH 1996 "NEW THREATS FOR OLD.")

"It is an ANCIENT Welsh ART based on a BRILLIANTLY simple I-D-E-A, which is a SECRET. The best form of DEFENCE is ATTACK (Clausewitz) and the most VITAL element of ATTACK is SURPRISE (Oscar HAMMERstein). Therefore, the BEST way to protect yourself AGAINST any ASSAILANT is to ATTACK him before he attacks YOU... Or BETTER... BEFORE the THOUGHT of doing so has EVEN OCCURRED TO HIM!!! SO YOU MAY BE ABLE TO RENDER YOUR ASSAILANT UNCONSCIOUS BEFORE he is EVEN aware of your very existence!" (MONTY PYTHON)

"Christ, Henry, Frank's got everything here except Clausewitz, On Hemorrhoids!" (HAWKEYE PIERCE, MASH)

An essay by Daniel Moran (Professor, U.S. Naval Postgraduate School)
Sample: "Cooking is thus an instrument of eating, the pursuit of digestion by other means."

Congressman: You say ''to paraphrase Clausewitz.'' What is that? What is Clausewitz?

DoD Undersecretary: I apologize for the analogy, which is obscure. The book, I have to say, is impenetrable, and I think the only part of it that is—that anybody mostly has ever read is the one line that ''war is the continuation of policy by other means.'' 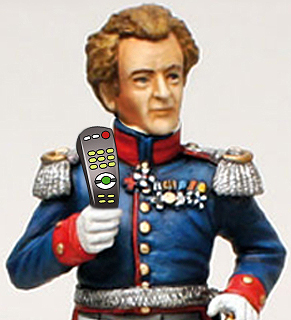 Clausewitz and Information Operations
[From http://www.infosysblogs.com/infytalk/2013/02/] 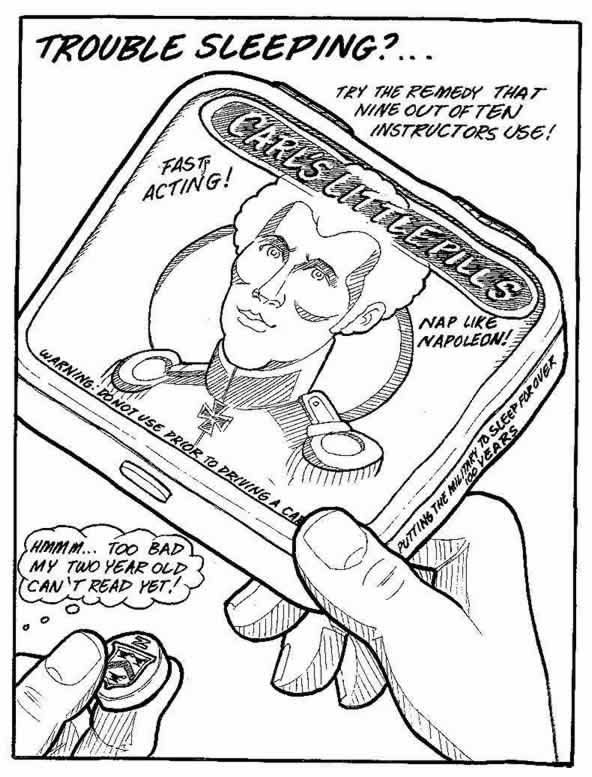 Strictly speaking, the editors of The Clausewitz Homepage
are unable to endorse this particular cartoon, but hey, why not?
(U.S. Army War College) 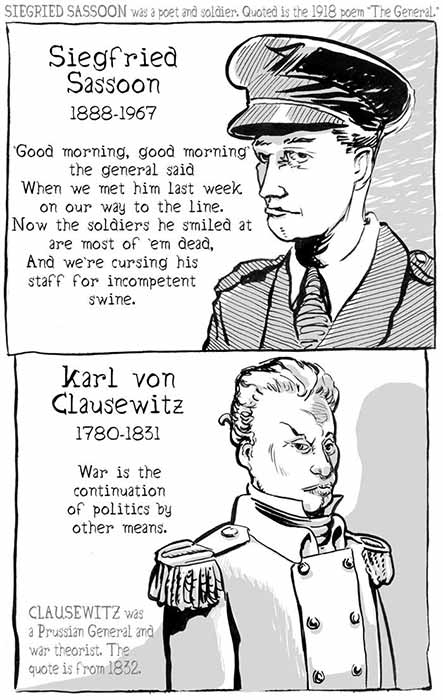 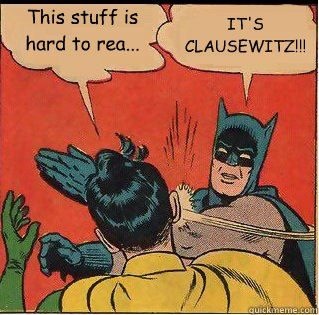 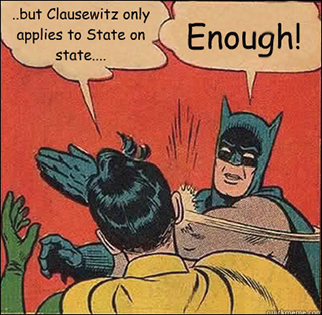 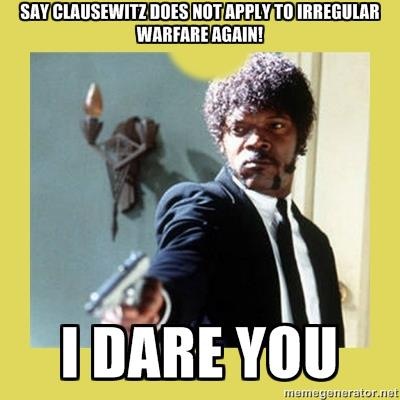 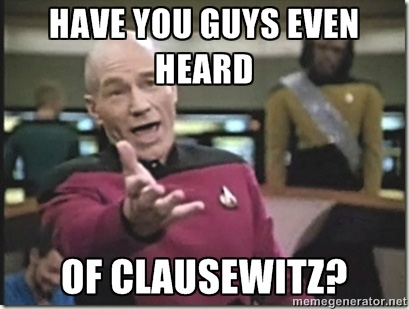 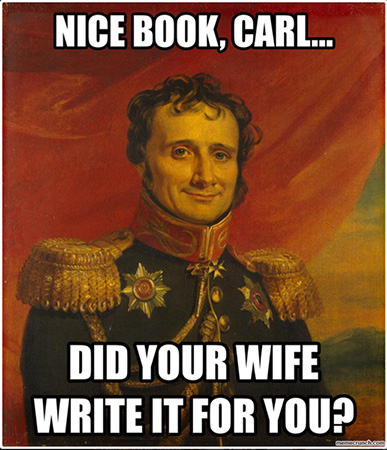 Pedantic Note: This image shows the wrong Jomini (this is Antoine-Henri's son Alexander). 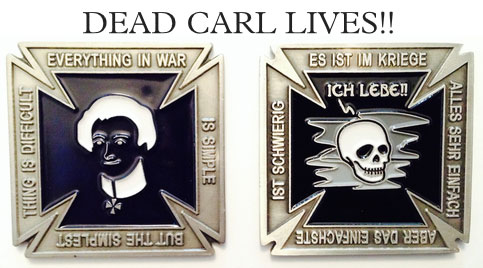 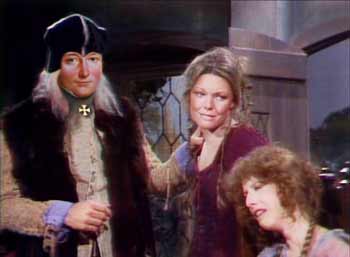 Distraught woman (Jane Curtin): You charlatan. Our cities are in ruins, our farmlands are devastated, our commerce destroyed, half our territory is occupied by the enemy, and everywhere our forces are in retreat and disarray. Admit it, you don’t know what you are doing.

Theodoric of York (Steve Martin): Wait a minute. Maybe she’s right. Perhaps we should abandon the old ways and take a different course. Perhaps instead of improvised armies made up of amateur peasant soldiers led by ignorant aristocrats we could create a body of skilled professionals commanded by graduates of a national war college. Perhaps instead of arming men with traditional spears and swords we could develop new weapons with greater range and killing power through the exploitation of scientific knowledge and mechanical invention. Perhaps to facilitate these advances we could develop more efficient forms of administration, banking, and logistical support. Perhaps we could encourage our wisest warrior to write a grand treatise that would enable our future military leaders to benefit from past experience (entitled ‘On Fighting’-- no that’s too general; ‘On Winning’-- no, that’s too specific; ‘On War’—hmmmm, that seems about right). Perhaps I, Theodoric of York, could initiate all these to achieve a great change, indeed a veritable Military Revolution, that would not only guarantee our national security but open the door to territorial expansion, and even global dominance. (Pause). Naaaaah.