Welcome to all subscribers of The Clausewitz Studies Newsletter!

We hope you will enjoy this newsletter, which focuses on articles and news concerning the great Prussian's legacy.

For Carl and Marie von Clausewitz, December was, in Marie's own words, their lucky month.

They confessed their love in December 1805. In December 1809 Carl returned to Berlin from Königsberg, where the court and the Prussian government had spent in exile the tumultuous years after the defeat at Jena-Auerstedt in 1806. And on December 17, 1810, Marie and Carl married.

The couple was wed in the Marienkirche in Berlin. Nowadays the medieval church is almost completely overshadowed by East Berlin's Television tower (formally known among tourists as 'the disco ball') in its close vicinity. Back in the early nineteenth century, the Marienkirche was fashionable among patriots because its Gothic brick building appeared so uniquely German. (Marienkirche Foto Credit: Berlin.de)

The church archives in Berlin (Evangelisches Landeskirchliches Archiv in Berlin — ELAB) still keep on microfilm a record of the Clausewitzs' wedding. Yet the two-century-old pages harbor quite a few surprises. In the church record book, Carl's last name is entered as "Klausewitz." Then the ages of Marie and Carl are also mistakenly reversed as thirty and thirty-one years old, respectively. In times when young women were married off to men twice their age, it was unusual that the bride was a year older than the groom. We can only speculate whether this was a clerk's error, or that Marie and Carl felt a bit uneasy about their quite untraditional marriage.

In this ssue of The Clausewitz Studies Newsletter:

• What we found interesting: Articles, News, and Podcasts

• Panorama: What in the world?

What we found interesting

We could easily call the fall issue of Infinity Journal "the Clausewitz edition." Five of the six published articles use Clausewitz's seminal treatise as a basis to study modern challenges. Colin S.Gray discusses the concept of strategic sense (Link, requires registration). Donald Stoker argues whether the term 'total war' has any practical meaning at all (Link). (In his recent paper "Clausewitz's Categories of War," Christopher Bassford points out that Clausewitz did not use the term "Total War" in Vom Kriege and that whatever the meaning of the modern phrase may be, it is not derived from his work.) Robert  Mihara discusses the (in)utility of military interventions (Link). Lucas Milevski analyzes the modern wars of honor and more practically, a potential NATO war in defense of the Baltic states against Russia (Link). Hugh Smith offers a curious Clausewitz-inspired "trinity of trinities." (Link)

Sibylle Scheipers, of the University of Saint Andrews's School of International Relations and director of The Institute for the Study of War and Strategy, is someone whose research we are closely following and are quite excited about. Currently Dr. Scheipers is working on a project on Clausewitz, small wars, and people's wars. In the most recent edition of the European Journal of International Security you can read her article "'The Most Beautiful of Wars': Carl von Clausewitz and Small Wars." (Link)

As it goes these days, no media outlet is complete without at least one article on Donald Trump's election as president of the United States and speculations about what his future administration will do. We offer you an analysis written by Cmdr. Daniel Dolan, USN (Retired), for U.S. Naval Institute's online portal USNI News (Link). "The lesson is simple enough—the side with the most weapons and soldiers does not always win," Cmdr.Dolan argues. "The war theorist Carl von Clausewitz describes the danger of comparing figures of strength, concluding that that will be enough to determine a path victory. He states, "that would be a kind of war by algebra." Clausewitz repeatedly emphasizes the role of human passions, emotions, and the play of chance in war. America's frustrations fighting radical Islamic terrorists around the globe for the past 15 years serve only to underscore this timeless strategic truth."

Are you following King's College's Defense Studies Department blog Defence-In-Depth? In it, professors, researchers, and grad students muse about problems they have encountered in the classroom or in scholarly work, next to reports from conferences, discussions of books and current issues. Recently Dr. Bleddyn Bowen, another up-and-coming Clausewitzian scholar to follow, wrote on strategic theory and the difficulty of taking action: "Principles and concepts in strategic theory are a point of departure to consider your options for action, which can provide mental structure to the chaos of reality and guard against unhelpful dogmas at the same time. In other words, strategic theory is not a strategy. Strategic theory should be useful in any circumstance to help you develop a strategy for any particular scenario." (Link)

In The Strategy Bridge, Omar Mohamed discuses whether non-democratic (or less democratic) states are better at producing and providing more space for "master strategists," compared to the often messy decision-making process in democratic states (Link). Unknown to Mohamed, a similar question actually occupied Carl von Clausewitz some two hundred years ago. In his essay Umtriebe ("Agitations," early 1820s) he wrote the following passage:

"The English played their international role most effectively under Elizabeth and Cromwell, when they enjoyed the least internal freedom; the Swiss, on the other hand, have long since accepted their political insignificance; the Dutch lost their independence earlier than their neighbors; the Americans have not always shown themselves worthy of the great continent they represent; and there is nothing whatever to say about a free state like Poland.

The deliberations of a parliament can reinforce a government's policy, but they can also cripple it, and the one is a likely as the other." (Carl von Clausewitz, Historical and Political Writings, edited and translated by Peter Paret and Daniel Moran, Princeton University Press, 1992, page 351.)

This passage does not suggest that in "Agitations" Clausewitz argued against the need for constitution and liberal reforms in Prussia and the greater German realm, quite the opposite. Rather he affirmed the need to understand the political complexities, the historical context, the makeup of institutions, and their interdependencies.

On the Internet page of the Historical Museum of Leipzig (Stadtgeschichtliches Museum)you can now find two digitized letters written by Carl von Clausewitz in 1817 and 1830 (Link). The first one, wrongly dated 1827 (we have already emailed the archivists), reveals the then-chief of staff of the Rhine Command as an officer attentive to the educational needs of his staff. With this letter Colonel Clausewitz ordered for one of his staff officers a book on Napoleon's campaign of 1812 in Russia — Histoire de la guerre de la france contre la russie (sic!). In all probability, the book is Frédéric Guillaume de Vaudoncourt's Mémoires pour servir à l'histoire de la guerre entre la France et la Russie (1817). Despite the signature "addressee unknown," the second letter is in all likelihood written to August Neidhardt von Gneisenau. This piece of correspondence captures Clausewitz's continuous efforts to secure the legacy of his mentor Gerhard von Scharnhorst and the wellbeing of Scharnhorst's remaining family. There are also two additional letters, one from Gneisenau and one from Mrs. Karoline von Gneisenau, in which Carl and Marie von Clausewitz are mentioned.

The digital release of these letters encourages the notion that there are many more Clausewitz papers out there. We indeed believe that the current push to digitize archival collections, or at least to store catalogs online in more accessible form, will probably bring to light additional sources. Who knows, perhaps even the complete drafts of On War will someday emerge from dusty, long-forgotten boxes in some German archive.

Panorama: What in the World?

Formula 1 is one of those places we most certainly do not expect Carl von Clausewitz and On War to be read or even studied in details. But here it is: apparently Toto Wolff, an Austrian investor and the executive director of this season's winning team Mercedes AMG Petronas, is also one of us.

As stated in a recent article on the subject: "Wolff has even tapped military historians, who directed his attention to the work of the 19th-century Prussian general Carl von Clausewitz and his philosophy of "leading with intent." Tomes such as On War never taught anyone to make a car go faster, but Wolff insists it all has a measurable impact. For one, the trophy cabinet is full. Plus the drivers have never punched each other." (Link)

Many fans believe that Star Trek can explain just about everything in the world, from theoretical physics to Barrack Obama's foreign policy. ML Cavanaugh, a US Army strategist, suggests that USS Enterprise's spacefaring missions are also a good way to interpret the Clausewitzian trinity to laymen. Think about the interplay between Bones-Spock-Kirk. (Link)

P.S. If you have an interesting article in mind, please send us a link, plus a short description if it is written in a language other than English, German, Russian, or Bulgarian. (Vanya's French works only for 1-2 page article.)

If you have information, translations, contacts, or anything else related to Clausewitz and Clausewitz scholarship, drop us a line and we will spread the word.

Let us know what you think about this newsletter! And send us anything you find relevant, interesting and newsworthy. Until January, Happy Reading! 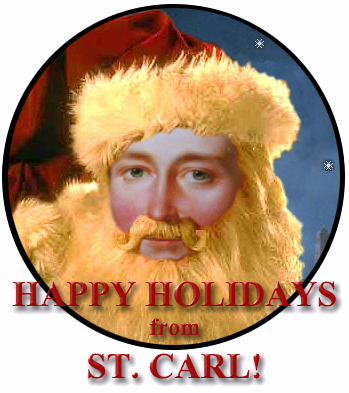