" Clausewitz summed up what it had all been about in his classic On War. Men could not reduce strategy to a formula. Detailed planning necessarily failed, due to the inevitable frictions encountered: chance events, imperfections in execution, and the independent will of the opposition. Instead, the human elements were paramount: leadership, morale, and the almost instinctive savvy of the best generals.... The Prussian general staff, under the elder von Moltke, perfected these concepts in practice. They did not expect a plan of operations to survive beyond the first contact with the enemy. They set only the broadest of objectives and emphasised seizing unforeseen opportunities as they arose. Strategy was not a lengthy action plan. It was the evolution of a central idea through continually changing circumstances."

Inspiration and Insight from a Master Strategist

Carl von Clausewitz is widely acknowledged as one of the most important of the major strategic theorists; he's been read by Eisenhower, Patton, Kissinger, Chairman Mao, and many other leaders. In Clausewitz on Strategy, the Boston Consulting Group's Strategy Institute has excerpted the passages most relevant to business strategy from Clausewitz's classic work On War. That famous book is the most general, applicable, and enduring work of strategy in the modern West: a source of insight into the nature of conflict, whether on the battlefield or in the boardroom. Clausewitz speaks the mind of the executive, revealing logic that those interested in strategic thinking and practice will find invaluable. He presents unique ideas, such as the idea that friction—the difference between what happens in plans and what happens in reality—is an intrinsic part of strategy. Clausewitz on Strategy offers Clausewitz's framework for self-education, a way to train the reader's strategic judgment.

TIHA VON GHYCZY is a faculty member at the University of Virginia's Darden School of Business. He is a fellow of the BCG Strategy Institute of The Boston Consulting Group. As a former partner of BCG, he was engaged in the practice groups for manufacturing/time-based competition and high technology.

BOLKO VON OETINGER is a Senior Vice President of The Boston Consulting Group and Director of the firm's Strategy Institute. He is a member of BCG's Technology and Communications practice and has published many articles and several books on strategy and innovation. See Books by Bolko von Oetinger.

CHRISTOPHER BASSFORD is a former US Army artillery officer. Long Professor of Strategy at the National War College in Washington, DC, he now teaches at JSOMA, part of the Special Warfare Center at Fort Bragg. He is editor and webmaster of The Clausewitz Homepage and ClausewitzStudies.org; the author of several books, including Clausewitz in English: The Reception of Clausewitz in Britain and America (New York: Oxford University Press, 1994) and On Waterloo: Clausewitz, Wellington, and the Campaign of 1815 (Clausewitz.com, 2010).

REVIEW: "Writers who use war as a metaphor for business have always been less than appealing to me. Maybe it's because, as some folks say, "It's a 'guy' thing," and I'm not a guy. On the other hand, I had trouble putting down Clausewitz on Strategy (Wiley, 2001), a publication of the Boston Consulting Group's Strategy Institute and edited by Tiha von Ghyczy, Bolko von Oetinger, and Christopher Bassford. In their carefully chosen selections from Clausewitz's On War and in their lengthy commentary in the introduction, these present-day strategists present much food for thought."

REVIEW: "Like many who are interested in strategy, I have attempted to read his classic book, On War. I found it to be hard going, and of limited benefit to my interest in business strategy. Clausewitz on Strategy is an extremely well-done book that takes the key points of On War, polishes them until they shine brightly, sets them amid many commentaries that elaborate on the same points, and uses a thoughtful introduction to connect the ideas to business strategy. The book's structure reminded me of a fine necklace, with the major gem stones set amidst complementary smaller gems. For me, this was the perfect approach, and I liked the book very much."

Obtain through these links or try one of the Clausewitz Bookstores:
United States
United Kingdom
France
Germany

Clausewitz is frequently referred to within the context of business strategy. For example, Mintzberg, Ahlstrand, and Lampel, Strategy Safari: A Guided Tour through the Wilds of Strategic Management (New York: The Free Press, 1998) makes intelligent references to Clausewitz in six separate discussions. There are many other examples of business theorists drawing on Clausewitz, some interesting and insightful, others nonsensical. Some other relevant links are listed below. We don't normally comment on the validity of any particular reference, unless we are particularly impressed or provoked.

While many writers say quite bluntly that "business is war," The Clausewitz Homepage takes the position that business is NOT war—not even metaphorically speaking. It's true that politics, business, and war belong to the same broad class of nonlinear phenomena and that there are events within business that correspond in significant ways to war. Indeed, wars have actually been waged at times by commercial entities (think of the Hanseatic League or the East India Company) for essentially commercial objectives. For that matter, there have always been mercenary armies, which are essentially businesses that sell their military capabilities. But these are very specific instances of business and war occupying the same space at the same time. In general, just as war is a particular manifestation or subset of politics, business analogs to war are subsets of a larger phenomenon—thus, business as a whole is properly compared to politics or ecology, not war. Just as most political entities cooperate far more than they conflict, most business entities co-exist with each other in a state more similar to symbiosis than to predation.

On the other hand, we've known some business thinkers who reject the business/war analogy altogether, claiming that business is about the creation of value, whereas war is pure destruction. This idea, too, is, in our view, in error. War—at least, when it is pursued with sense and skill—is about the creation of political value. Thus politics may involve "creative destruction" in much the same manner as business obviously does.

This was a business-oriented site devoted to promoting the ideas of air-combat theorist John Boyd, inventor of the famous (and very useful) OODA Loop, among other things. Boyd is pretty intriguing in a limited sort of way. Unfortunately, too many of his acolytes feel that his disciples are obligated to attack Clausewitz—and virtually everyone else, except Sun Tzu—for no clear reason beyond branding. Interestingly, Boyd sites don't seem to last long.

"Clausewitz was a Data Strategist," Machine Learnings (Understand how AI will change your work and life), Jan 26, 2017.

"Waiting for our Clausewitz"
Originally posted Monday, April 28, 2003. Henry also has some other posts discussing Clausewitz.

William Pietersen, [Professor of the Practice of Management at Columbia Business School].

CLAUSEWITZ: The Struggle for Power Continues

(This particular assignment is gone, but Professor Magala soldiers on.)

"If you are looking for power, this is the place to be. You have just entered the world of corporate power. On this site you will find the visions of two dozen students of the Erasmus University Rotterdam on how the theories of Carl von Clausewitz find their ways in modern society. The context in which these visions were written down is a project of the Rotterdam School of Management on power given by Dr. S. Magala. These visions are the result of the assignment to describe modern transformations of power and new power agencies on a global scale. The larger goal of the assignment was to answer the question about political, cultural and commercial mobilization: Napster, Seattle/Washington anti-IMF/WB/WTO demonstrations and European integration." (Papers are in Dutch.)

• Video and transcript. "Sir Lawrence Freedman on the Evolution of Strategy." BCG Perspectives, November 2014. Section: Strategy/Video. Sir Lawrence Freedman, professor of war studies at King’s College London, is regarded as one of the world’s leading authorities on war and international politics. He has written extensively on these topics. His most recent book, Strategy: A History, provides a wide-ranging account of the development of strategy, not only in the military sphere but also in business, politics, and beyond.

• "On War: Culminating Point of the Attack." Excerpts from On War in Clausewitz on Strategy. BCG Perspectives, October 29, 2004. Categories: Strategy.

"Our approach to the development of strategic management software is influenced by ancient theories developed by army generals like Sun Tzu and Von Clausewitz, but put into practice with the latest technology development."

From the publisher: "On War was one of the first books on modern military strategy. Writing mostly after the Napoleonic wars, between 1816 and 1830, von Clausewitz never lived to see it published. He had a theory that it was the integration of political, societal and economic issues that was the most important factor in deciding the outcome of a war. This new theory made On War one of the most important texts on strategy ever written. Andrew Holmes' interpretation of On War illustrates how von Clausewitz's insights can be applied away from the battlefield. By bringing the book to life through 52 modern case studies of business and society, this brilliant interpretation of On War is an entertaining and thought-provoking accompaniment to one of the most famous strategy books ever written."

The Historical Genesis of Modern Business and Military Strategy: 1850 - 1950
by Keith Hoskin, Richard Macve and John Stone
UMIST, LSE and The University of Wales, Aberystwyth

As submitted to Interdisciplinary Perspectives on Accounting Conference, Manchester,7-9 July,1997. Later published as "Accounting and Strategy: towards understanding the historical genesis of modern business and military strategy" in Bhimani, A. (ed.) Contemporary Issues in Management Accounting, pp. 166-197, (OUP), 2006.

William A. Levinson at Clausewitz.org

Levinson tells us that business is war and quotes Clausewitz: "Rather than comparing [war] to art we could more accurately compare it to commerce, which is also a conflict of human interests and activities; and it is still closer to politics, which in turn may be considered as a kind of commerce on a larger scale." On War, Book I, Ch. 3." See his book, The Way of Strategy (December 1999). See also http://www.ganesha.org/wos/index.html.

Buy this book from Amazon.com

The US Marine Corps' Warfighting Manual adapted for Managers.

Currency's edition of the USMC's highly Clausewitzian manual Warfighting features interviews with famous former Marines including F. Lee Bailey, Ed McMahon, and Donald Regan. They tell how they have used the Marine Corps' battle strategies of strength and straightforwardness as their secret weapons in every confrontation, whether at a corporate, departmental, or personal level.

Publisher: "Distills the wisdom of Carl von Clausewitz's monumental 1832 classic On War―considered by many eminent scholars as the most distinguished Western work on war ever written. This book transposes Clausewitz's most enduring concepts on leadership and strategy to help today's executives and managers think like strategists."

We have not seen this book and have no ideas as to its origins, arguments, or value.

The Art of Action: How Leaders Close the Gaps Between Plans, Actions and Results (Nicholas Brealey Publishing, 2011), ISBN 1857885597 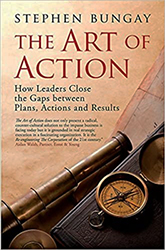 We hear increasingly that "strategy" is irrelevant and that all we really need is better execution. We're pretty sympathetic to the frustrations underlying that view, but the author of The Art of Action understands that strategy and execution are not separate domains. Stephen Bungay, who enjoys real credibility as a businessman (including 17 years with The Boston Consulting Group) and as a military historian (graduate work at Oxford and Tübingen) demonstrates a sophisticated grasp both of Clausewitz and Moltke's thinking and of how that thinking was reflected in practice by the German General Staff. Crucially, and unusually for writers who attempt to map the military domain to business, he genuinely understands that "business is not war."